Sorry, we cannot do it in Irish, so apologize us that we try it in English…
Last weekend was very special and exciting. Saturday 12th of November 2011 we travelled to Dublin because we had been invited to the celebration of 80 years 66 Naomh Eoin Clontarf Scout Group.

On Saturday 12th of November four of our Scout Group – Willy, Mirco, Lena and Achim – took a flight to Dublin. The reason was that they had been invited from our friends of the Clontarf Scout Group 66 Naomh Eoin. On Saturday night there was a Dinner Party in the Scout Den in Clontarf. We were happy that we could meet our Irish friends again and we enjoyed it very much. The leaders, the Rover Scouts, the Venture Scouts and some friends had been there. The Scout Den was illuminated in various colours and we got a very good dinner meal.

On Sunday we joined an Investiture. This was very special because it was the first time in the new programme scheme of Scouting Ireland. Some of the Beavers (aged 6 to 7) moved up to the Cup Scouts (aged 8 to 10) and some of them became Scouts (aged 11 to 15) while the former Patrol Leaders and Assistant Patrol leaders formed the new Venture Scout Troop (aged 16 to 17). The former Venture Scouts are now the first Rover Scout Troop (aged 18 to 20) the 66 Naomh Eoin ever had. After this ceremony two new leaders and over 40 Beavers, Cubs and Scouts had been invested. They made their Scout Promise in Irish. At the end we presented one of our Scheuburg unit neckerchiefs as a gift and also as a symbolic investiture into our Scout unit with the wish that we will stay friends. Then they made a photo of the whole unit and finished the celebrations of their 80th Birthday.

Sunday evening they showed us a video of this years Star Scout Show. Traditionally the Scouts of 66 Naomh Eoin make a very good performance for that show. This year they presented the Lion King. Fantastic! They did a great job. In the closing ceremony they sung „The Scouting Call“ which is meanwhile well known in our Scout Unit too. 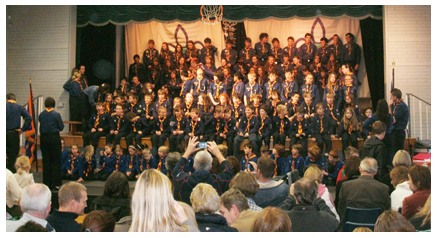 We are full of thanks for this experience and for the hospitality of our Irish friends. 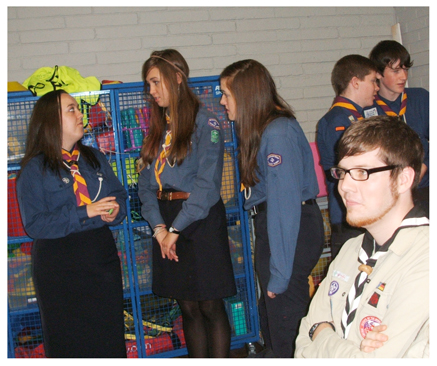